Tuscany like all other Italian regions has a solid culinary tradition.

Given the Lock-Down period to which most of the countries are now subjected, we decided to give you a Taste of peasant Tuscany, with some good typical Tuscan dishes.

Today we offer you a first roundup of best typical Tuscan dishes, often of the most popular and genuine tradition.  So when you come to Mugello near Florence you can experience them all.
Many are based on bread which in Tuscany is strictly unsalted.

These are black croutons based on a patè of chicken livers, anchovies and capers. Crostini are in practice almost always used for appetizers. The unsalted white Tuscan bread lends itself well to receiving the tasty flavor of the crostini patè. Crostini can be tasted cold but we recommend the following procedure. Toast the bread as in the picture in the main heading above. Then spread an abundant hot layer of crostini patè on the bread and…. enjoy!! 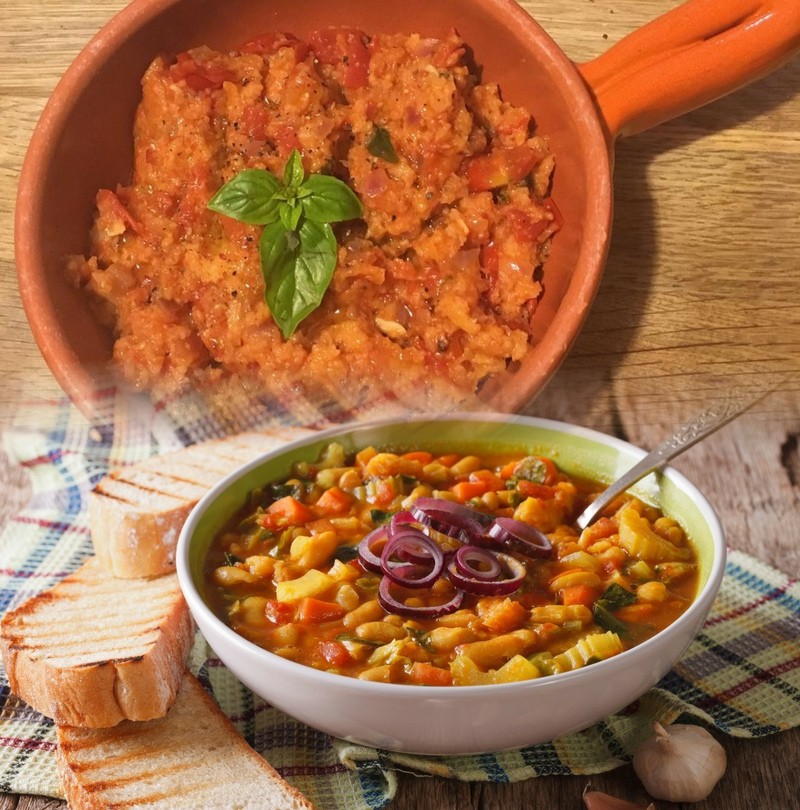 “Long live the pappa col pomodoro” was the leitmotif of the tv series “Gian Burrasca’s magazine”. It aired between the end of 1964 and the beginning of 1965. It was an unmissable moment of the week for young and old. The song was sung by Rita Pavone who also played the protagonist of the series. Upstream, however, there is the homonymous book by Vamba which dates back to the early 1900s. But aside from the song and the book, the pappa col pomodoro occupies a first-rate place among the best typical Tuscan dishes.

Pappa col pomodoro is a poor and fresh dish of the country culture. Extremely simple, the tomato mush loves the Summer since tomato stands out among its ingredients. The preparation is really easy because the ingredients you need are present in every pantry . In fact, to prepare it you only need tomatoes, garlic, basil, stale bread, broth and extra virgin olive oil.

Ribollita (the boiled over)

Stale bread, savoy cabbage, cannellini beans and black cabbage. Better the black curly kale of Tuscany, which must have “taken the ice”. That is, having frozen over during the winter so that its leaves become soft. All other vegetables such as carrots, potatoes and celery can be added to your taste. Except for a few strong points, there is no single recipe for this among the best typical Tuscan dishes.

To boil the soup it is better to use a saucepan with a thick bottom. This precaution prevents the ribollita from sticking and burning. Tradition has it that once cooked, slices of raw onion are added to the ribollita. Of course, a drizzle of natural extra virgin olive oil cannot be missing. As you can imagine, the ribollita is one of the best typical Tuscan dishes suitable for full winter.

Unlike the tomato mush, it has less tomato, is less liquid and above all it is much less hot! Also in this case it is a peasant recipe that has always been listed among the best typical Tuscan dishes. An example of poor cuisine of yesteryear typical of the summer season. It is prepared in a few easy steps and does not require cooking. In its most modern versions it can be enriched with tuna and vegetables. It can be a single plate, also convenient to carry on the occasion of a picnic out of town or to the beach. Like all the “rustic recipes” of the best typical Tuscan dishes it is also a poor recipe: it costs very little. Few and very common ingredients are enough to make panzanella. These are stale Tuscan bread, red onion, basil, extra virgin olive oil, vinegar and salt.

The Potato Tortello is the most traditional of the best typical Tuscan dishes of the Mugello area. Here, especially in spring and summer, festivals flourish that allow you to taste this specialty. Every restaurant, even every family, has its own particular recipe. However, wherever you taste tortelli del Mugello, the result is always that of a savoury and tasty dish. Of course we warmly advise you to come to the Mugello for the Tortelli. We would be pleased to reccommend a few restaurants and trattorias to you. The variations concern both the filling and the type of sauce which Tortelli del Mugello they are seasoned with. They are excellent with veal ragout, but also seasoned with wild boar or duck sauce. Also delicious with tomato sauce or in autumn with porcini mushrooms.

Of course, the tortello pasta is made with flour and eggs. For the filling you need various other ingredients. These are potatoes, Parmesan cheese, garlic, nutmeg, parsley and extra virgin olive oil.

Pappardelle are a type of egg pasta, typical of the Tuscan home tradition. They are similar to tagliatelle but are wider than its Emilian “cousins”. The dough is simple: flour, eggs and salt. The pappardelle must be cooked for 3 minutes in an abundance of boiling salted water. They are generally associated with strong and full flavored condiments. In fact, its rough and porous surface goes well with wild boar, hare, venison, mushroom or truffle sauces. The name derives from the verb pappare which in the past in Tuscany often replaced the verb to eat.

manucar
like writing about the Mugello, Florence and Tuscany. English teacher at IIS Giotto Ulivi.
Previous postGOOD MUGELLO HONEY
Next postGIVE AN EXPERIENCE